Saturday 18th August was the hottest day of the year thus far so it was a good day for garden visiting as we wouldn’t have worked in our own gardens!

Bressingham Gardens had warned us that it was a Thomas the Tank Engine Day and would be very busy so armed with picnics we set off. Children on the whole are not interested in plants so we enjoyed the gardens with very few other visitors.

Those who had visited Bressingham before noticed quite a change. Many of the island beds which used to be filled with conifers and heathers (definitely 70’s style) had been updated with spectacular massed plantings of grasses and perennials . The Dell garden was ablaze with colour from large group plantings and everything was well labeled.

Sundown was an absolute delight. We were greeted by Liz Bloom and her partner Graham who told us about the development of their garden, originally with the help of Adrian Bloom. Its one acre is packed with plants mostly AGM varieties – “because I know they are tried and tested” said Liz. We entered the garden along a narrow woodland walk which was a cool green oasis filled with plants of differing shapes and textures. A large new pond in the centre of the garden continued to help cool us and at the far end we found a stylish vegetable garden with raised beds and an immaculate greenhouse.

Our final stop was The Plantsman’s Preference where we indulged in a bit of retail therapy. Tim has a large selection of geranium and holds the National Collection of Molinia. Lots of members made a bee line for the shade section where several treasures were discovered.

Story & Pictures: Edwina Robarts; Click the photos above to see them full size. 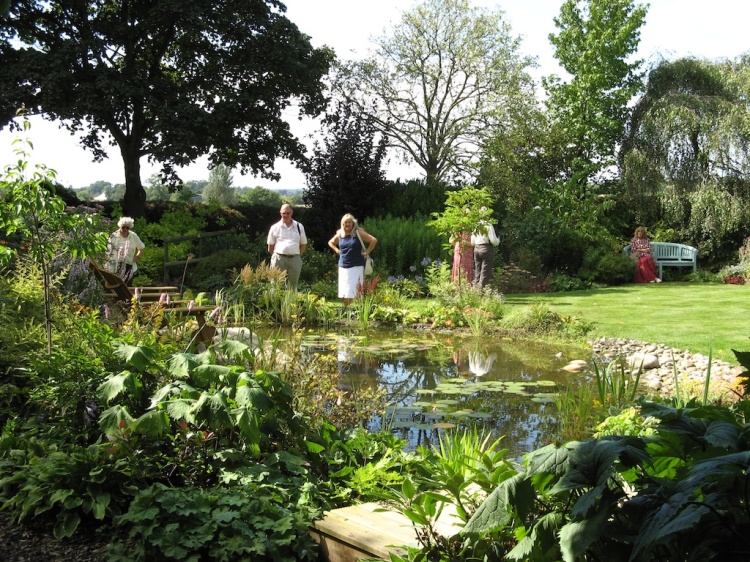