With an afternoon spare while staying in Wells, Somerset, early in September, Bill and I decided to visit Special Plants, near Bath.  Tucked away down a single-track lane flanked by tall hedgerows, Derry Watkins’ nursery is deep in the Wiltshire countryside.  Entering via the small gateway, I was immediately struck by the number of unusual plants around me.  A large platform to my right was arranged with a selection of seasonal interest plants, many of which were unfamiliar to me; Hibiscus trionum, an upright annual bearing large, creamy trumpet-shaped flowers 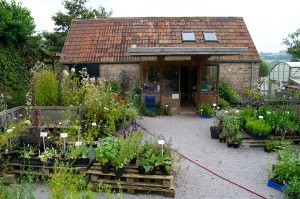 with deep chocolate throats, and Trachelium ‘Black Knight’ – lacy, deep violet umbels and dark foliage.  My eye was drawn to the glowing orange-scarlet flowers of Dahlia coccinea, and then ahead a rich purple Nemesia ‘Belmont Blue’.  Beyond, the benches stretched out, packed with a beguiling collection of plants.  Although the nursery space was fairly small, every inch was occupied.  A happy half-hour was spent pottering about, assembling various ‘must-haves’ in a trolley and passing the time of day with Holly, the resident spaniel.

At 2.30, Derry was scheduled to give a talk on seed collection, so Bill and I took the path round leading to the back of the house and joined a small group already gathered around the kitchen table.  The ceiling in this area was high and the windows on both sides extended to the top, making full use of any available daylight.  Tall, potted, cane-stem begonias grew to the full height of the windows, the light filtering through their pendulous clusters of pink flowers.  Through the open door we could see the terraced gravel garden, and the enticing herbaceous borders dropping away from the house.

Over a cup of tea, Derry began by talking about plants coming true from seed, saying that she didn’t spend time trialling hybrid seedlings to select new strains, but chooses to grow a lot of plants which come true from seed.  On the subject of hybrids and their progeny, Derry used Eschscholzia to illustrate strain-selection; the Eschscholzias in her garden are cream coloured, as that is the only variety which has been left to set seed.  The commonly grown yellow-orange type never breaks through now because the years of selection have isolated one colour strain, exclusively pollinated by local bees.  I pointed out that if a neighbour grew the yellow-orange variety, the bees may well mix the genes.  Derry’s reply was ‘You need to live at least three miles from anyone else!’.  That said, I have been selecting white foxgloves in my own garden for 6-7 years now and I rarely find a purple seedling these days, despite living cheek-by-jowl with purple foxglove growers, so perhaps the ‘local bee’ can be very local indeed.  Derry also mentioned the value of sterile hybrids which are such a boon to the gardener as, in a perpetual effort to set seed, they flower on and on throughout the season.

I was very interested to gather tips about the practical side of seed-collecting, which of course Derry does on a large scale.  The equipment was laid out on the table; a sizeable trug filled with several metal kitchen mixing bowls and a sheaf of paper bags.  We all trooped out to the garden and Derry lead us from plant to plant, showing us the seedheads of various species and demonstrating how to recognise when seed is ripe and how to harvest it successfully.  Large seed-heads can be placed in the metal bowls and processed indoors, smaller ones collected in paper bags.  It’s important to clean the seeds before storing, winnowing the chaff so that it isn’t sown alongside the seeds where it can sit and rot, affecting the seeds themselves.  Derry advised us to leave the seeds in a paper bag in a dry room indoors for a week or so before storing, fully dried, in the fridge.  It was fascinating to listen to such an experienced plantswoman discussing the her techniques and expressing her opinions about the plants she grows in her own garden, frequently in intricate detail and with great enthusiasm.

I asked about Angelica gigas, which I’ve found erratic to germinate.  The received wisdom is that A. gigas seed should be sown fresh but then left open to overwinter, during which time the cold will stratify the seeds, leading to germination in the Spring.  I described an experiment in which I sowed two trays, one of brown, ‘ripe’ seed and the other of dark red, fresh, seemingly ‘unripe’ seed.  To my surprise, the red seed germinated within 3 weeks of sowing, without the usual requirement of frost stratification, but the brown seed failed.  Derry explained that if the seed was very fresh, almost unripe, the overwintering stage could be skipped and germination was almost immediate.  I’m trying the same method again this year – the experiment is already underway.

If you’re travelling to the Bath/Bristol area, I’d recommend you to take time out to visit Special Plants – take it from me, you won’t be disappointed.  Derry’s seed list is on the Special Plants website, Mail Order plants are available from September to March, and every Tuesday from April to October at the nursery, Derry gives an informal talk at 11am and 2.30pm on a seasonal topic.

Derry Watkins will be our guest speaker at the Herts HPS on February 2nd, 2013. (Programme)