After a week’s holiday in a cottage nestled in the dunes of Whitesand Bay at the very tip of Cornwall, I was keen to drop into Phoenix Perennials, near Alton in Hampshire, on the long drive home.  Some weeks before, I had been trying to get hold of Persicaria ‘Dikke Floskes’, a particularly rich coloured, fluffy-flowered variety.  The plant’s breeder, Chris Ghyselen, was attending a plant fair at Sussex Prairies in early September but I couldn’t make it and Marina Christopher offered to pick up a couple of plants for me.

The nursery is open to the public by appointment, and Marina told us to hoot outside the gates when we arrived.  The huge iron gates swung open and we drove in to find a plant sales area which looked more like a colourful wild garden, filled with tall, elegant perennials and transparent grasses.  Sarah, Marina’s assistant, greeted us and then Marina herself appeared with a wheelbarrow of Sedum ewersii.  She gave me a catalogue and I went off to explore.

Phoenix Perennials is on high ground in a frost pocket, with a heavy clay soil and a high water table.  Conditions for plants are tough and if they can survive here, they can probably survive almost anywhere in the UK.  Marina has a background in ecology and wildlife is her main consideration when selecting plants for the nursery.  She shuns chemicals and is keen to promote all pollinators, not just bees but wasps, beetles and flies, too. In the eleven years since Phoenix Perennials was set up, she has identified thirty species of butterfly visiting the nursery.  This year alone has brought 24 species, including the migrant Clouded Yellow and Painted Lady.  While we were chatting amongst the sanguisorbas, Marina spotted a hummingbird hawkmoth darting and hovering nearby.  It was the first time I’d ever seen one, an unforgettable sight.

Marina is an expert on propagation and runs courses at the nursery.  She told me that over the years, 16 nurserymen have attended the course, with a view to growing better quality plants from their own stock.  Marina’s own cuttings mix consists of 70% horticultural grit, 30% loam.  All rooted plants are raised in loam-based compost with 20% grit, which retains moisture well and has a crumbly texture.  As a result, Phoenix Perennials doesn’t provide a mail-order service; the heavy compost tends to fall apart in transit and plants end up damaged.  However, Marina is known for the quality of her plants, and the nursery supplies Hortus Loci, Crocus and top garden designers for displays at the Chelsea Flower Show each year.

As I wandered about, I was accompanied by the nursery’s resident cat, Smokey, a Korat.  This lithe, silver-grey, velvet-coated breed is revered in its home country, Thailand, and she was keen to be friends.  According to Marina, Korats are believed to bring a good harvest, which seemed appropriate under the circumstances.

At present, there is no website for Phoenix Perennials, but details are available on the RHS Nursery Finder.  A new website should be launched in the near future. 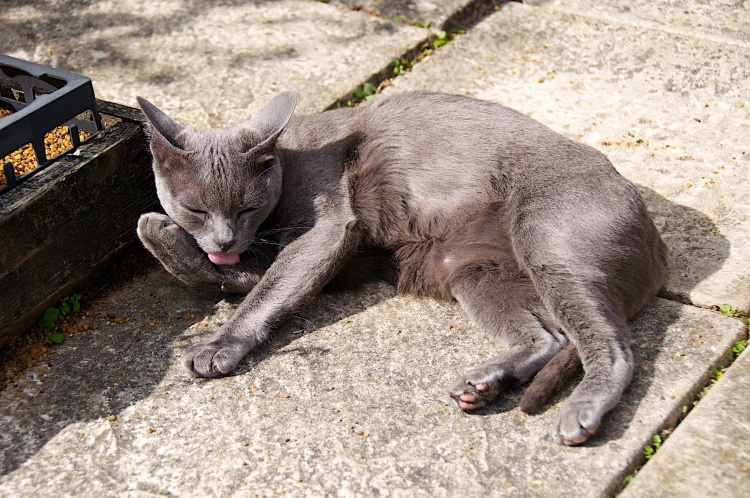 Marina Christopher will be coming to speak at the Herts HPS in October 2014.