Some HPS Herts Group members with good memories may recall a talk we had 5 years ago by Don Witton, holder of the Plant Heritage National Collection of Euphorbias. Googling for a particular variety of Euphorbia recently – E. donii ‘Amjilassa’ – I came across Don’s website and was struck by the breadth of his knowledge. As well as being the National Collection holder, in possession of 134 species and cultivars of Euphorbia, Don and his wife, Dot, were founder members of the South Pennines HPS Group in 1995. As Bill and I were due to travel to Sheffield to visit our daughter and collect a car-load of her gubbins with which to further clog up our loft, I made an appointment to visit Don and his wife, Dot, at their home in the nearby village of Harthill.

There is no mistaking the Witton house from the road; Don’s front garden is a treasure trove of unusual plants, including Epimediums, Pulmonarias and a fascinating specimen of Anemone nemorosa ‘Viridiflora’, with whorls of green flowers. Nearby I noticed the airy clear lilac-mauve flowers of Polemonium ‘Lambrook Mauve’ and nodding heads of Aquilegia ‘Crimson Star’. Don and Dot welcomed us in and were very pleased to hear we were Hardy Planters like themselves. Over a cup of tea, we admired their large display of potted specimen Euphorbias, and chatted about the various events Don has attended over the years, including winning two Gold Medals at the Tatton Park Show. Don showed us his greenhouse, in which a blackbird was jealously guarding its nest.

Don and Dot’s garden is fairly compact, and the hardstanding which previously housed their caravan is now home to the ‘retail’ area, with staging laden with pots of hardy perennials and Euphorbias at nursery prices. Most of the Euphorbia Collection lives on Don’s allotment, a mile away across the village. Before we left, Don showed us his collection of Hostas; a recent enthusiasm are the miniature varieties, which he has planted in an alpine sink for best effect. Their dainty leaves looked so endearing, I can understand his passion for them. At the front of the house, he pointed out Hosta ‘Praying Hands’, the leaves of which emerge tightly folded like hands in prayer.

At Firvale allotments, it was immediately obvious that Don’s section was nothing like the average plot. His vegetable patch was in the early, though promising, stages of growth but it was the garden beyond that really drew my eye. On an open site, the Euphorbia Collection has been integrated into a tapestry of herbaceous perennials, with broken-slate paths weaving between the beds. Don said his first inspiration came from Alan Bloom’s garden in Bressingham, Norfolk, and the island beds he has created certainly echo the great plantsman’s style.

As we wandered through the garden, Don introduced me to one Euphorbia after another, explaining their origins and planting requirements along the way. The huge, broad leaves of E. x pasteurii (a hybrid between E. mellifera and E. stygiana; hardier than E. mellifera and more spectacular), the shocking-pink-veined leaves of E. sikkimensis, the muscular, dark foliage of E. ‘Excalibur’, and the extraordinarily large, red-eyed bracts of E. x martini ‘Helen Robinson’. All were enchanting their own way, and a more enthusiastic guide would be hard to find.

It wasn’t all about Euphorbias, however; some of the perennials were definitely worth a second look. The beautiful (though temperamental) Paeony tenuifolia, with its ferny foliage and silken, goblet-shaped ruby flowers; Geum ‘Flames of Passion’, a gorgeous double rosy-pink variety, and the filigree-leaved Astilbe ‘Sprite’, which Don says grows in normal soil for him, unlike so many of its moisture-loving relations. Approaching the middle of the garden, the larger perennials bulked up either side of us, contrasting with a central flat scree bed planted with the tiny gems of Don’s collection. A passion for Erodiums was evident here, and it was also the perfect home for chirpy little Euphorbia polychroma ‘First Blush’ with its variegated leaves and pale yellow flowers.

Euphorbiaceae is the largest plant genus in the world and there are species on every continent except Antarctica, with a huge variety of forms and plant types, from annuals and biennials to leafy perennials, woody shrubs and trees, and many succulents. Most garden-worthy varieties originate from Europe, the Middle East and Asia (Himalaya). The colour in the Euphorbia’s ‘flowerhead’ is provided not by petals or sepals but by the cyathium leaf, commonly known as a bract. They are insect-friendly plants, thanks to their nectaries which vary in colour from yellow, orange and red through to black. Although the main flowering period is April to June, some varieties, such as my E. donii ‘Amjilassa’, are summer-flowering.

I noticed a small greenhouse on the allotment, in which Don told me he grows on all his Euphorbia cuttings, taken in July and August. He was keen to emphasise the importance of wearing vinyl gloves when in contact with Euphorbia sap, as it is a notorious skin irritant. Over the past 14 years, the Wittons have been busy with shows and lecturing, and have held an Open Day each May, when the spring-flowering Euphorbias are at their height, but they have decided to scale down their activities now and 2014 was the final year for the Open Day; their garden and allotment can now be visited by appointment only.

I had a wonderful time visiting Don and Dot’s collection. I came away knowing so much more than when I arrived and I have, you might say, a renewed ‘spurge’ of enthusiasm for Euphorbias.

And Don very kindly gave me a potful of E. donii ‘Amjilassa’ seedlings which I shall be growing on for next year’s HPS Plant Sale. Thanks, Don! 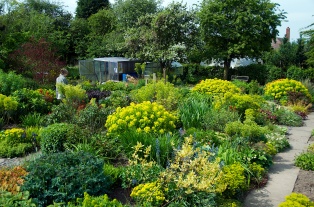 At Don’s Garden, the reserve stock

Marion Jay and Don Witton at the allotment